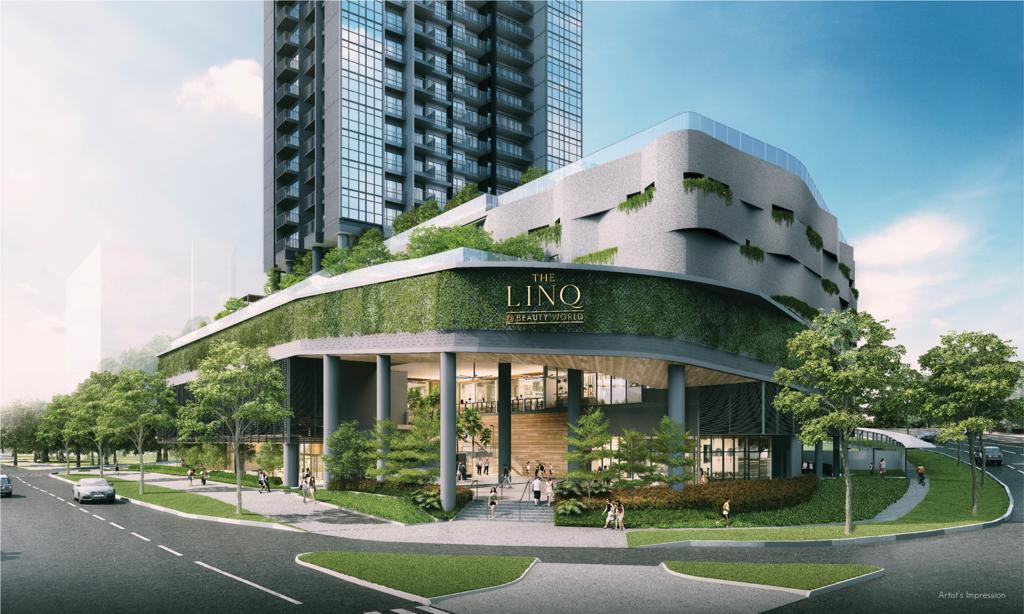 The Only Freehold Integrated Development
20 Years in The Making

For more up to date information on The Linq @ Beauty World, do check back here at our blog.

The Linq @ Beauty World is one very unique project. It is a single block Freehold mixed development, in that there are residential units at the upper floors and retail space (mostly f&b) at lower floors.

This is a Freehold development that is 20 years in the making, and with only 120 units, is definitely a project only for the keen-eyed investor.

Developed by Singapore-listed BBR Holdings, The Linq is projected to TOP on July 2025, and will launch in Nov 2020.

The Linq @ Beauty World: An Introduction

The first most significant aspect of The Linq @ Beauty World is that it has an amazing location, situated right beside Beauty World MRT station, along Upper Bukit Timah Road and in the sought after District 21.

It is marked with a blue location marker in the map below. It occupies a land space of 45,757sqft, with a plot ratio of 3.0. 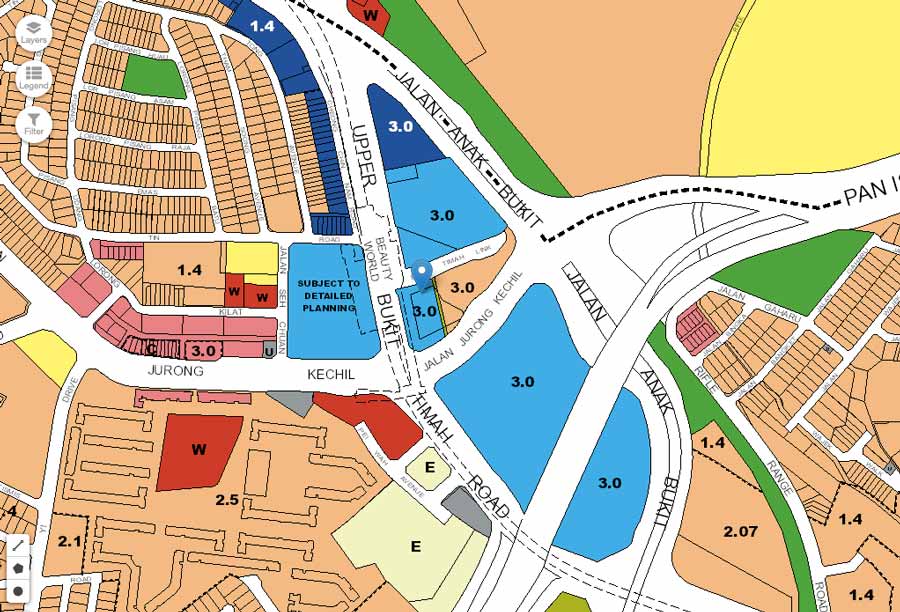 Crafted as a single storey mixed development, the first 2 storeys are commercial spaces, with a total of 54 units, mostly F&B. The car park is on the 3rd and 4th floor, a sky terrace on the 5th floor, and finally, residential units from the 6th to 20th storey ranging from 1 to 4 bedder units.

To further cement its star quality, The Linq is not only beside an MRT station, the basement of the development has direct access to Beauty World MRT Station, via a POPS (Publicly Owned Private Space), which remains open 24 hours a day.

The Linq @ Beauty World is developed by BBR Holdings, which was incorporated in Singapore on 7 July 1993.

BBR Holdings (S) Ltd is a listed corporation with a market capita of more than S$80 million, and they have developed several private residential properties, including Nassim Hill, Lush on Holland Hill, Lake Life and Bliss @Kovan.

It is a multi-disciplinary company, with core areas of business including General Construction, Specialised Engineering, Property Development and Green Technology.

The Linq @ Beauty World: Freehold 20 Years in The Making

There are a number of reasons that make The Linq @ Beauty World an exceedingly compelling development, chief of which is that it is a Freehold development 20 years in the making.

Why do we say so?

Along the stretch of Upper Bukit Timah where The Linq is located, there are a number of freehold/999 developments, namely Beauty World Plaza, a 999 year development built in 1980 and UOB Centre, a Freehold development built 20 years later in 2000.

And now, with another 20 years later, the launch of The Linq in 2020, a rare opportunity for investors looking to own a piece of Bukit Timah.

The Linq @ Beauty World: What’s Nearby

There are a number of amenities

Amenities near The Linq @ Beauty World

There are a number of amenities nearby which makes living The Linq comfortable and convenient:

The Linq has a rather straightforward structure: a single block mixed development 20 storeys in total, with 120 residential units distributed over 8 stacks.

Referring to the Site Plan below, the stacks face either North (where the view is towards the Bukit Timah Nature Reserve), South (which has more of a city view) and the West (towards the private landed enclave).

The great thing about a single-block development like this is that any problems of blocks being near to each other or having neighbours look into your unit is non-existent.

For readers who are concerned about the west sun that might occur for stacks 7 and 8 (which are west facing), we have been informed that this will be addressed in a few ways: first, the balcony is rather deep, which helps to provide some shading against the west sun. At the same time, the units are equipped with low-e laminated glass which will help to reduce the heat gain inside the unit.

Low-E, or low-emissivity glass can minimize the amount of infrared and ultraviolet light that comes through, without reducing the amount of light that enters the home. Low-E glass windows have a microscopically thin coating that is transparent and reflects heat. The coating can be even thinner than human hair. The Low-E coatings keep the temperature in the home consistent by reflecting the interior temperatures back inside.

The Linq @ Beauty World: 5 Reasons Why

There are a number of reasons that makes The Linq a compelling buy for the keen-eyed investor, and these are as follows:

Integrated developments are something very much sought after, because they offer the best of all worlds, all in one.

An integrated development is defined as a mixed-use development with a residential and large commercial element that is seamlessly connected to a transport node and public spaces.

There is a price premium to be paid for these developments because they offer unparalleled convenience for the resident – access to amenities and transport options easily. They are also great for investment – tenants revel in the magnitude of convenience.

There are currently 16 Integrated Developments in Singapore and they are all 99 year leasehold projects:

This makes The Linq @ Beauty World an extremely rare opportunity – an integrated development with a Freehold status.

The Greenery Transformation in Bukit Timah area consists of 2 parts, which will serve to enhance the liveability of the area. In the increasingly urban Singapore, buyers are seeking respite from the hustle and bustle – and this is where access to greenery becomes increasingly in demand.

The Rail Corridor is a former railway line that stretches 24km north to south of Singapore. The future Woodlands North Coast and Greater Southern Waterfront areas will be linked by this trans-island green artery. Now a “green corridor”, it will be transformed into a community space that links 1 million people within 1km of the Rail Corridor. When the Rail Corridor is connected by 2021, it will spur the development of surrounding lands and rejuvenation of older districts.

Envisioned as a journey through a riverine forest, the Bukit Timah-Rochor Green Corridor will be a new linear park along the Bukit Timah Canal. It will include a sky park elevated above the canal, and be set amongst lush greenery, providing the public with more opportunities for leisure and recreational activities.

The first phase of the project comprises 1.4 km and stretches from the Rail Corridor at Rifle Range Road to Elm Avenue.

One of the major plans that we can observe in the Draft Master Plan is the Beauty World Integrated Transport Hub.

The Transport Hub will also include new amenities such as an indoor sports hall, community library and eldercare facility.

This transformation is set to bring an abundance of benefits to the residents within the area.

At the same time, along a 750m stretch of Upper Bukit Timah Road, there will 2 upcoming malls – The Linq @ Beauty World and a new Integrated Mall. Together with the 4 existing malls, there will be a total of 6.

The Cross Island Line (CRL) is Singapore’s most ambitious infrastructure plan yet, with more than 30 stations and will be our 8th MRT line. First announced in 2013, it will be built in 3 Phases, with Phase 1 slated for completion by 2029.

After 6 years of assessment, the authorities announced on Dec 4, 2019 that the Cross Island Line will take a direct route under the Central Catchment Nature Reserve, drilling at a depth of 70m. This will be more than twice the depth of the average underground MRT tunnel, which is about 30m below ground.

This means that the Cross Island Line will intersect with the Downtown Line at either Beauty World MRT or King Albert Park MRT Stations.

These were the reasons behind the decision:

The line under the CCNR will reduce travel time for commuters by six minutes, as compared with the skirting option.

2. Reduces public transport fares by 15 per cent on the direct route

A shorter and more direct route would cost commuters less, made possible under the current distance-based fares.

3. Lowers construction cost by about $2 billion

Building under the reserve could cost taxpayers $2 billion less compared with the alternative skirting option.

In the longer term, LTA said the direct alignment decision could prove to be more environmentally friendly as it had lower energy consumption as compared with the skirting option.

Bukit Timah will have a new one-stop integrated facility with a Community Club, redeveloped market & hawker centre at the doorstep of Beauty World MRT station. It will also feature a range of new amenities such as an indoor sports hall, community library and elderly facility to enhance liveability.

The Bukit Timah Community Building is planned as a new one-stop integrated community hub featuring a re-developed hawker centre, an indoor sports hall and a library to enhance liveability and energize the community.

Along with a planned commercial/residential zoning directly opposite The Linq, this means that there will be a cross junction of amenities and underground walkways that connect all 4 places, giving residents and commuters the convenience only seen in Orchard, where malls Lido, Wheelock, Tang Plaza and Ion intersect.

Taking a look across the prices of new launches in the Upper Bukit Timah and Bukit Timah region, we’ve selected a few for comparison.

The new launches that are within close proximity to The Linq include Daintree Residences, View at Kismis, Forett at Bukit Timah, Mayfair Modern and Mayfair Gardens. Royalgreen, which is another Freehold development, is located further down the road near Sixth Avenue MRT Station.

If you are on the lookout for a Freehold new launch at this point in time, the only choices would be The Linq @ Beauty World, Forett at Bukit Timah or Royalgreen.

Comparing between Forett and The Linq, Forett is not that near to the MRT and should residents choose to walk over, it will be quite a fair distance to walk. Forett’s average psf hovers just below $2000psf, and comparatively, The Linq is right next to an MRT station and naturally will command a higher psf for the convenience that it offers. At the same time, The Linq is located much nearer to the upcoming transformations that we’ve highlighted above.

For Royalgreen, its location is in District 10, and the average psf is already at $2700psf.

Comparatively, The Linq is a more compelling buy for a freehold development, especially with the fact that it offers so much more in terms of convenience.

The Linq @ Beauty World is one very unique development to look out for.