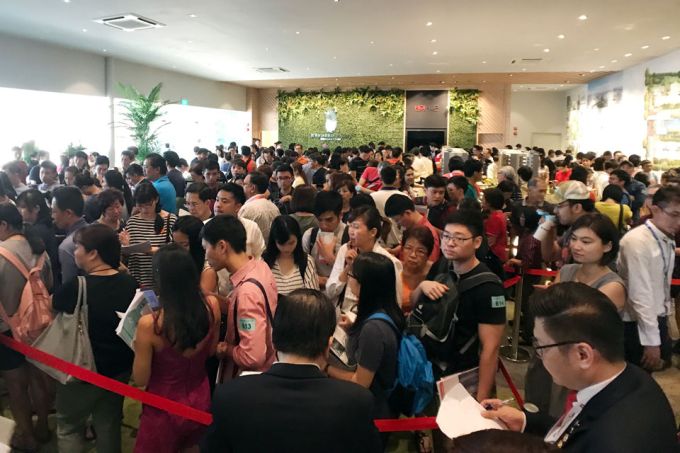 A reduction in supply of and an increase in demand for EC units may result in a shortage next year and 2019.

WHEN all 531 units of Hundred Palms Residences were reportedly sold within the first day of the launch in July, it was remarkable in more ways than one. Firstly, it may be the first time that all the units in an executive condominium (EC) project were sold out within one day. Secondly, this is only the second time in a decade that a major residential project launch achieved such a feat. Thirdly, it illustrated a turning point in the dynamics in the EC market.

It was not too long ago that the EC developers faced a growing supply of unsold EC units. The developers’ inventory of launched and unsold EC units jumped from 609 housing units in Q3 2014 to 2,028 units in the following quarter. This was the result of a spillover from four new EC launches in Q4 2014, which contributed 2,505 new units.

The oversupply in the EC market further worsened from January 2015 to April 2016 with the launch of 10 new EC projects comprising a total of 5,544 units. By April 2016, the EC developers’ stock of launched and unsold EC units peaked at the all-time record high of 4,007 units.

The surge in the launch of new EC projects in the 16-month period was largely due to the introduction of a rule in January 2013. Under this rule, EC developers must wait 15 months after they acquire the land parcel before they could launch the EC project for sale. This rule was part of the government’s series of property cooling measures.

Before the introduction of the 15-month rule, some developers were launching their EC project within eight to 12 months after they acquired the land.

However, the effectiveness of the 15-month waiting period rule to cool land prices is questionable. What is evident is that by delaying the supply of new EC launches, this rule increases the inelasticity of new EC supply. The result is that the EC primary market is less efficient to respond to any change in demand.

Another effect of this rule is that the developers would rush to launch their EC projects once the 15-month waiting period has passed, as they are left with a shorter time to sell their entire projects before the expiry of the five-year ABSD (additional buyer’s stamp duty) deadline. Developers must complete the development and sale of their residential projects within five years to avoid incurring the 15 per cent ABSD on land cost.

Housing supply is inherently less elastic than demand. The 15-month rule causes supply to be even more inelastic and contributed to a “pent-up supply” in the EC market in 2015.

Consequently, the momentum of launches is disrupted as the EC market saw an absence of EC launches for most of 2014 before a sudden spike in EC launches in 2015.

Under the combined weight of the cooling measures, the Singapore residential property market started to cool since the last quarter of 2013. As residential property prices and transactions started to decline from Q4 2013 onwards, the government gradually reduced the number of EC land parcels for sale in the semi-annual Government Land Sale (GLS) programmes.

From the GLS programmes of 2010 to 2014, the government sold a total of 41 EC development sites in the five-year period. This amounted to an average of 8.2 sites per year.

This was a result of the suspension of the Design, Build and Sell Scheme (DBSS) in 2011. With the end of DBSS, more sites were freed up for potential EC development. The EC land tenders were well received by developers, who saw the viability of developing EC in times of rising private home prices.

However, in the three-year period from 2015 to 2017, only four EC land parcels were sold by the government. This translated to only 1.3 sites per year.

Since 2013, the government had been attempting to alleviate the oversupply issue in the EC market by reducing the number of EC development sites available for sale. The result of this government action, coupled with the 15-month waiting rule, eventually led to the prevailing undersupply situation in the EC market.

On average, the monthly EC primary market sales have been increasing yearly from 132 units in 2014 to 418 units units in the first eight months of 2017.

The key driver of the rising demand for EC units was the growing demand from the “sandwich class”. As the difference between the average HDB resale price and the average mass-market condominium price increases, there will be a growing number of homebuyers who aspire to own a private residential property but could not afford to do so. As the number of these homebuyers who collectively made up the sandwich class increases, it would consequently drive up the demand for EC.

In addition, the sentiments in the residential property market had improved since the government relaxed some of the market curbs in March 2017. As a result, homebuying demand has gathered strength as more potential homebuyers enter the market.

The one-day sellout at Hundred Palms EC is a rare phenomenon. But it illustrated that demand can change much more rapidly than supply, especially when the future supply of EC is shackled by an obsolete regulation.

Presently, there is only one remaining EC project yet to be launched, namely Rivercove Residences. This EC project, with an estimated 640 to 650 units, is located along Anchorvale Lane in Sengkang. It is quite likely that Hoi Hup Realty and Sunway Developments, the developers of Rivercove Residences, would only launch this project next year to capitalise on the pent-up demand that could be building up.

In addition, the government is going to sell only one EC land parcel in 2017. This site is located in Punggol. Based on the 15-month rule, the new EC units from this site would only be available for sale after Q1 2019. It is too little, too late to meet the current demand from homebuyers.

When this site is launched for sale by tender in December, strong interest and aggressive bids are expected from developers. This could further drive homebuyers’ demand for the remaining EC units, if there are any left when the land tender closes in January 2018.

As a result, there could be a looming shortage of new EC units in the primary market in 2018 and early 2019. 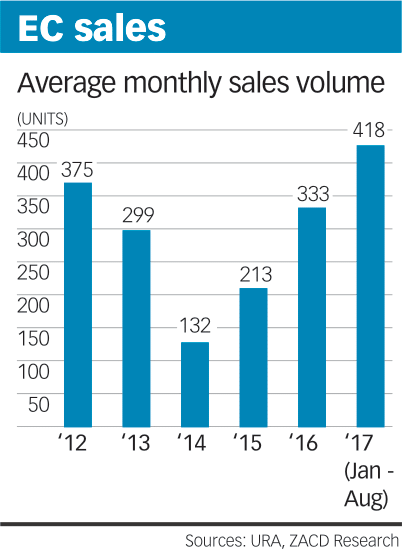