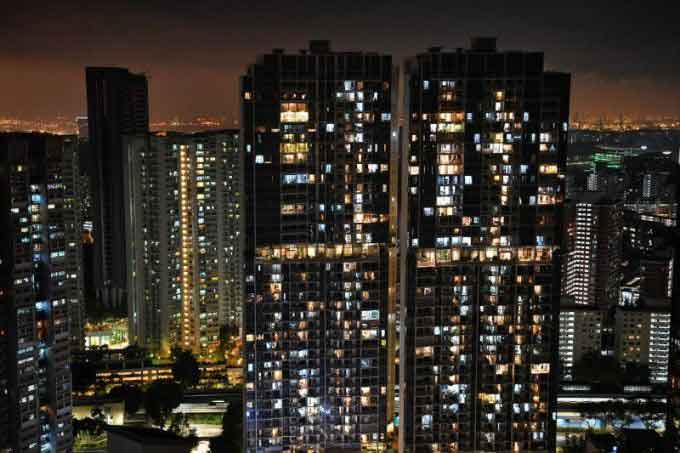 Compared to the previous year, the latest estimates are 60.9 per cent lower than the 1,633 units sold in January 2021. That said, OrangeTee & Tie senior vice-president of research and analytics Christine Sun noted that the January 2021’s high volume was “an anomaly”. Figures were boosted by the launch of the 1,862-unit mega project Normanton Park, which moved 645 units that month.

“In contrast, there was only one launch last month, the 107-unit Belgravia Ace,” she said.

Huttons Asia senior director (research) Lee Sze Teck added: “The sales volume in January 2022 is comparable to December 2021, despite there being 1 launch in January compared to 3 launches in December.”

Including executive condominiums (ECs), new home sales dipped by 4.7 per cent to 685 units in January 2022.

Nicholas Mak, ERA Realty’s head of research and consultancy, said: “The sales volumes in December 2021 and January 2022 are expected to be lower than previous months in 2021 partly due to the impact of the latest cooling measures and partly due to the festive lull period in December and January. However, it is encouraging to see that the sales in January did not contract drastically compared to the preceding month.”

The top-performing project including ECs by sales volume last month was Normanton Park, which sold 93 units last month. This is higher than the 73 units of the same project transacted in December 2021.

It is followed by freehold strata landed housing project Belgravia Ace, which moved 77 of its 85 units released over its launch weekend on Jan 22 and 23.

“The excellent sales seen at Belgravia Ace signifies that there is ample liquidity in the market, and that the profile of buyers in the market now is predominantly first timers so the cooling measures do not affect them. It also sends a message that buyers are not waiting for the dust to settle before entering the market as they recognise a perfect opportunity to buy when others are uncertain,” Lee said. 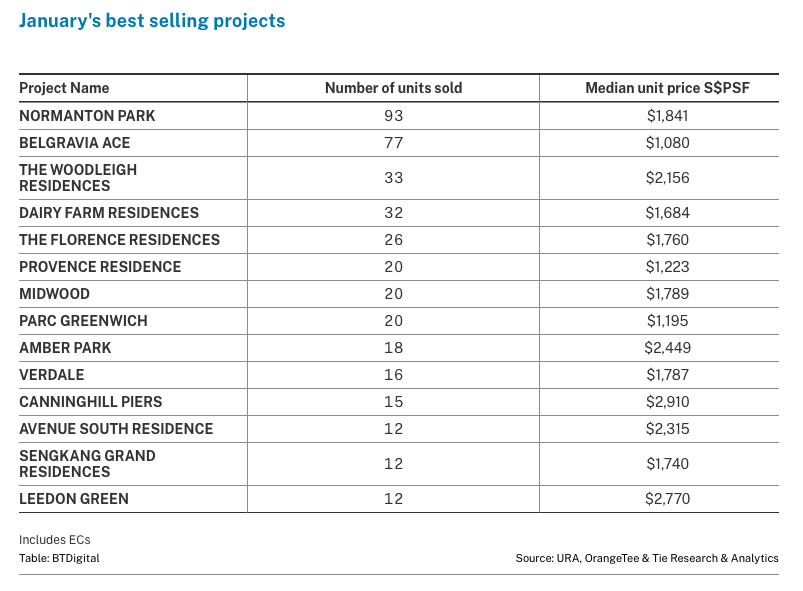 Based on transaction prices, the biggest proportion of new private homes sold excluding ECs again came from the S$1.5 million to S$2 million bracket, which made up 28.2 per cent of December’s total new sales involving landed and non-landed properties. This was closely followed by homes in the S$2 million to S$3 million range, which accounted for 26.1 per cent of the volume. 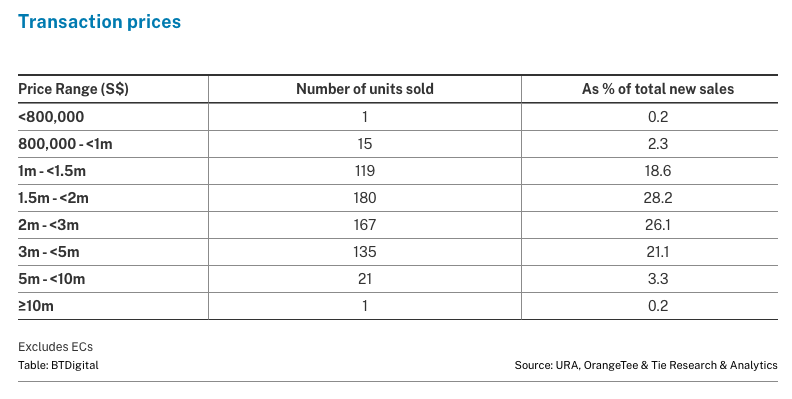 Meanwhile, the core central region (CCR) made up 15.3 per cent of the month’s sales with 98 units transacted. This is lower than the 134 units transacted in December last year.

That said, Lee noted that after adjusting for new launches in December (Mori, Zyanya, Perfect Ten) and January (Belgravia Ace), all of which are located in the CCR, last month’s CCR sales “remain steady and unaffected by the cooling measures”.