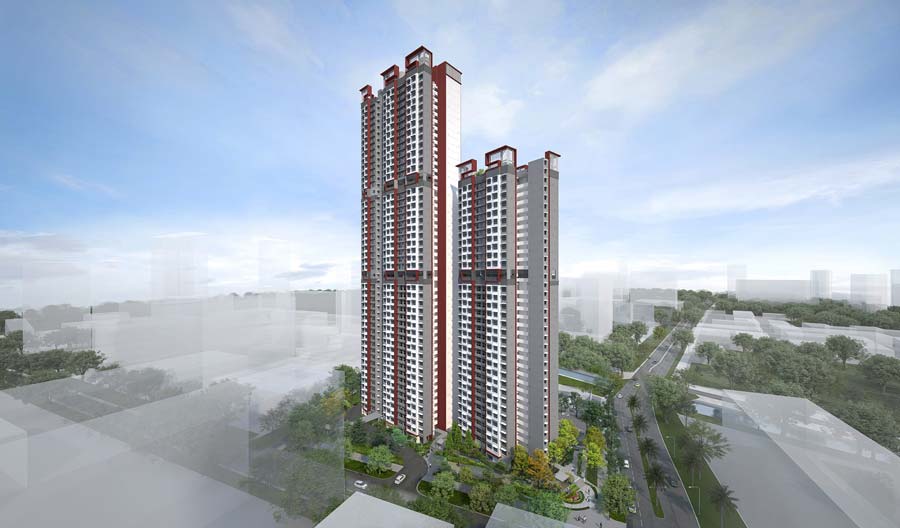 SINGAPORE – A total of 3,953 Build-To-Order (BTO) flats were launched for sale by the Housing Board on Thursday (Feb 17), including 398 units in Kallang/Whampoa – the second project under the prime location public housing (PLH) model – which come with a 6 per cent subsidy clawback clause upon their resale.

The units are spread across six housing projects in four estates, in the first sale exercise of the year, with waiting times ranging from about three to five years.

The project under the PLH model – King George’s Heights – comes with stricter buying and selling conditions.

It comprises three-room and four-room flats housed in one block with two wings of 33 and 47 storeys. Bounded by King George’s Avenue, Syed Alwi Road and Rochor Canal, the site is within a six-minute walk of the first PLH project in Rochor launched in November last year.

The estimated floor area of the Kallang/Whampoa units is also slightly smaller than the other BTO projects in this launch, with three-room units at 66 sq m each and four-room units at 89 sq m each.

Buyers will have to wait an estimated 59 months – just under five years – for these flats, as the project is estimated to be completed in the third quarter of 2027.

Owners of the Kallang/Whampoa flats will have to pay 6 per cent of the resale price or valuation, whichever is higher, to HDB when they sell their home on the open market for the first time. The subsidy clawback applies to only the first resale transaction and does not apply to subsequent resales.

This also means that owners who choose not to sell their flats will not get their subsidies clawed back.

This is because HDB has to provide additional subsidies on top of those provided for all BTO flats in order to launch these prime area flats at affordable prices.

All subsidies are factored into flat prices when they are launched as BTO flats.

Owners will also be subject to a 10-year minimum occupation period (MOP), up from the five years for other flats, before they can sell their flats on the open market.

Standard BTO flats come with a five-year MOP and do not have a subsidy clawback clause.

At King George’s Heights, fewer flats will be set aside for the Married Child Priority Scheme, which gives priority to applicants whose parents or children live in the same area, said HDB on Thursday.

“The reduced quota will provide more opportunities for Singaporeans who do not have family members living near the area to also have an opportunity to live in the estate,” said HDB on Thursday.

The other mature estate BTO project is Dakota Crest in Geylang, with 443 two-room flexi, three-room and four-room flats on offer across three blocks. 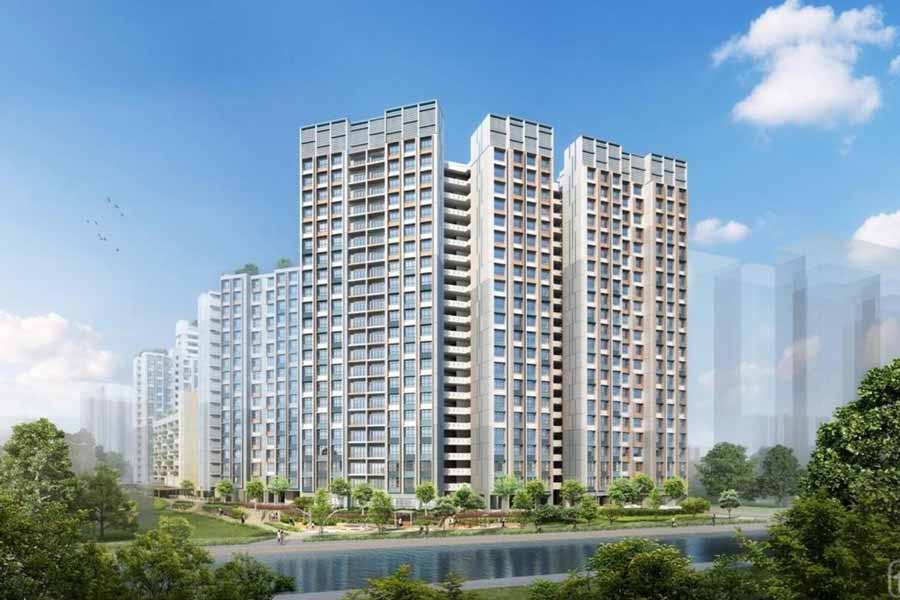 Dakota Crest in Geylang has 443 two-room flexi, three-room and four-room flats on offer across three blocks.

The project is located along Geylang River and the Geylang Park Connector, and is served by both Mountbatten MRT station and Dakota MRT station.

This comes on top of the 63 months – slightly more than five years – estimated waiting time for these units, as the project is estimated to be completed in the fourth quarter of 2027.

HDB said the longer construction time is due to additional site preparation works given its proximity to the existing Circle Line MRT and the need to comply with more stringent requirements set by the authorities.

There are two BTO projects in the non-mature estate of Yishun.

The bigger project is Grove Spring @ Yishun, where 987 two-room flexi, three-room, four-room and five-room flats are on offer across eight blocks on a site bounded by Yishun Avenue 6 and Yishun Avenue 8. 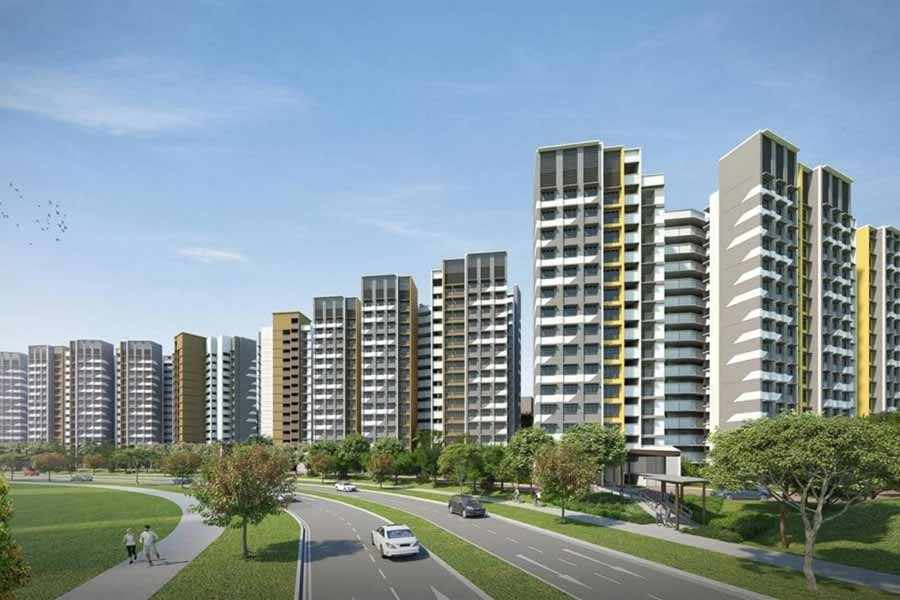 Buyers will also have the shortest wait for these flats at 26 months – just over two years – as the project is slated for completion in the fourth quarter of 2024.

The smaller adjacent project is Yishun Boardwalk, where 852 two-room flexi, three-room, four-room and five-room flats are spread across eight blocks.

The waiting time is also one of the shortest in this launch, at about 30 months – or 2½ years – as these flats are slated for completion in the second quarter of 2025.

Buyers can also choose from two BTO projects in the “forest town” of Tengah.

The bigger project is Plantation Creek in the Plantation district, where 713 four-room and five-room flats are on offer on a site next to the Pan-Island Expressway (PIE).

The smaller project is Parc Flora @ Tengah, where 560 two-room flexi, three-room, four-room and five-room flats are on offer in the Park district, where the car-free town centre is located. 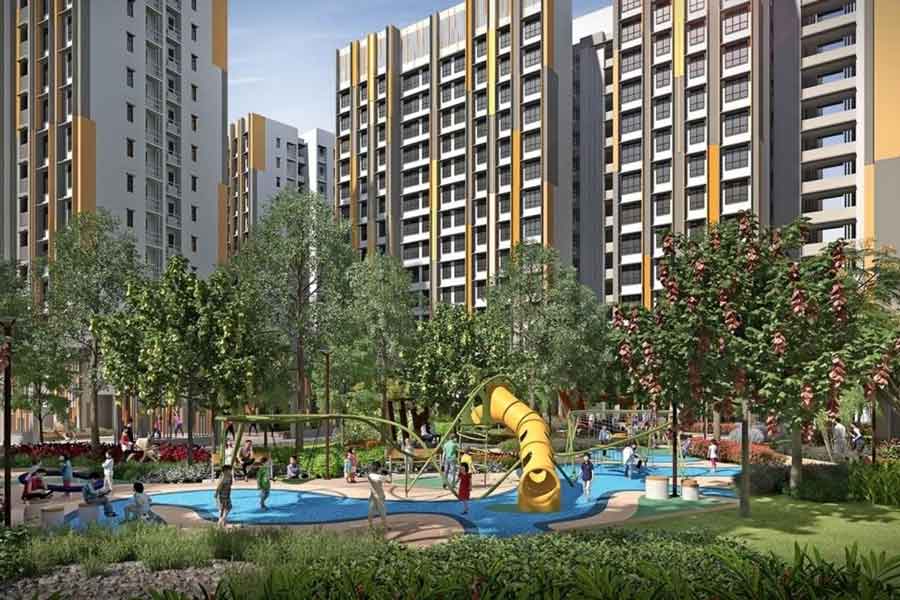 Buyers will have to wait 36 months – or three years – for these flats as the project is slated for completion in the third quarter of 2025.

Before the Covid-19 pandemic, the wait for standard BTO projects was about three to four years, compared with three to five years for this launch.

Applications for the flats close next Wednesday (Feb 23) at 11.59pm on the HDB flat portal. The flats will be allocated through balloting.

In May, about 5,300 flats will be offered in towns such as Bukit Merah, Jurong West, Ghim Moh estate in Queenstown, Toa Payoh and Yishun.

An adjoining site in Ghim Moh is also planned for public housing and will be launched this year, said HDB.

Another 6,300 to 6,800 flats in towns such as Ang Mo Kio, Bukit Merah, Choa Chu Kang, Jurong East, Queenstown and Woodlands will be offered in August.

The exact location of these projects and the number of flats at each site will be released closer to the launch date. 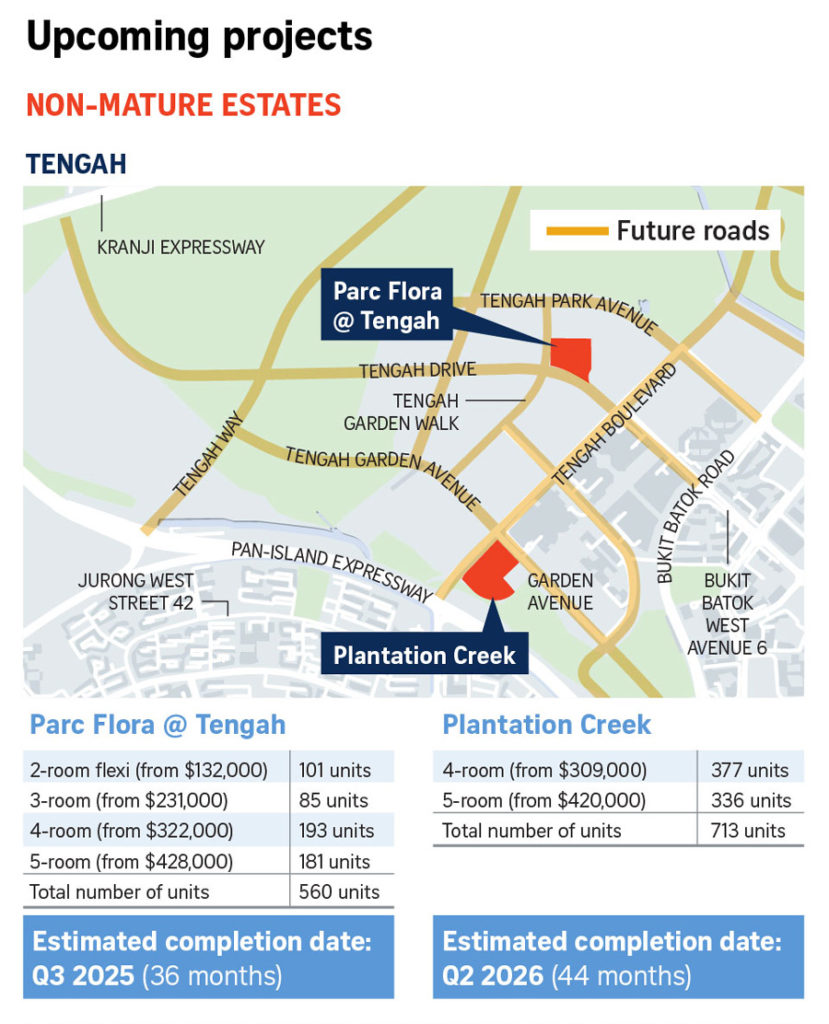 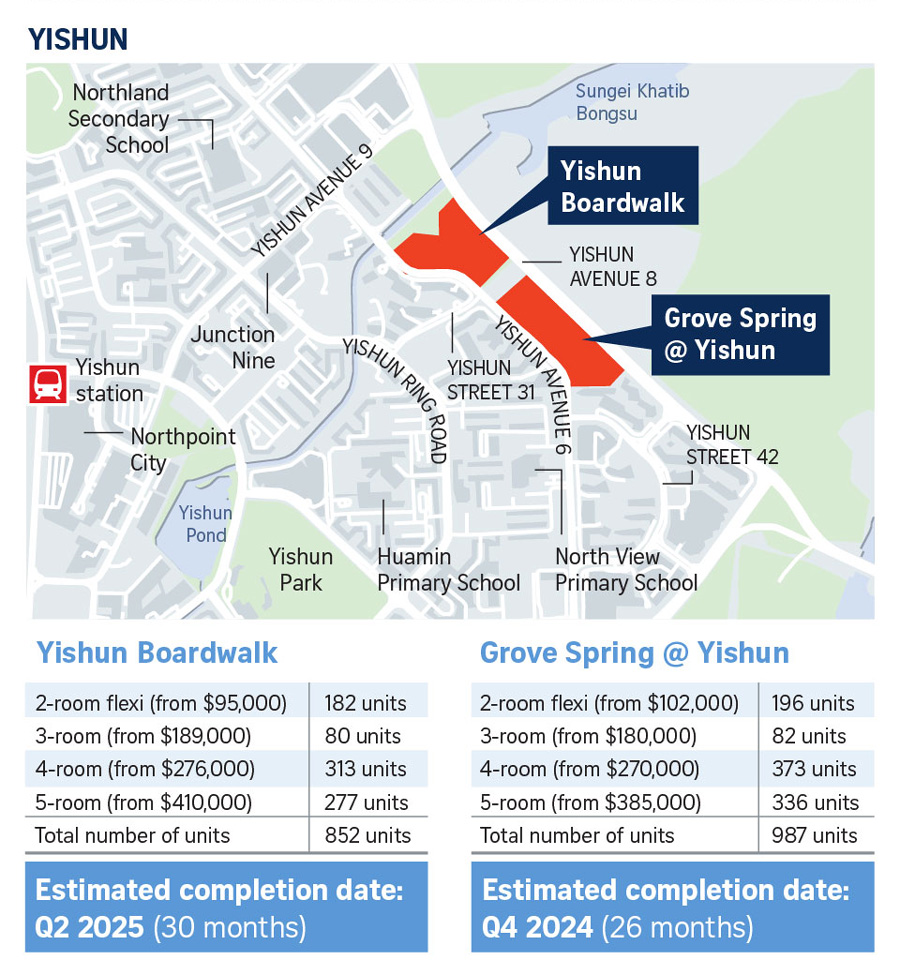 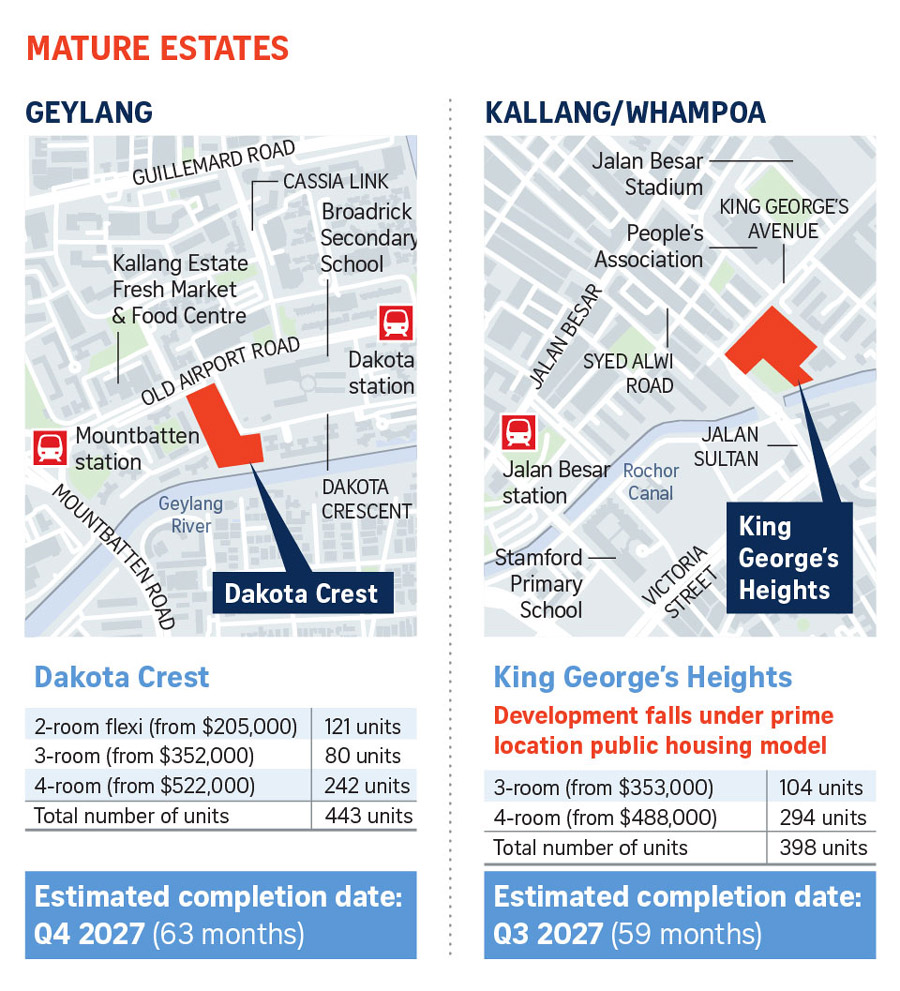 In the current sale exercise, property analysts said strong demand is expected for the PLH flats in Kallang/Whampoa, despite the stricter conditions.

PropNex Realty chief executive Ismail Gafoor said the King George’s Heights project presents another opportunity for those who have missed out on the Rochor BTO flats to try to secure a unit in the same area.

Ms Christine Sun, senior vice-president of research and analytics at OrangeTee & Tie, noted that the median price of $581,500 for a four-room flat in King George’s Heights is slightly lower than previous BTO launches in the Kallang/Whampoa area.

For instance, the median price for a four-room unit n Kent Heights, rolled out in November last year, was $585,500, she said.

“The slightly lower price this time could be to compensate for the longer MOP and more stringent selling and buying restrictions,” added Ms Sun.

Administration executive Jeannette Tan, 21, said she and her boyfriend are thinking of applying for a unit in the Yishun BTO projects as they have a shorter waiting time. If they choose to do so, they will have to forgo their queue number to pick a BTO flat in Jurong West.

“The Yishun flats will be completed sooner and it’s also more central compared to Jurong West which is really far west,” she added.