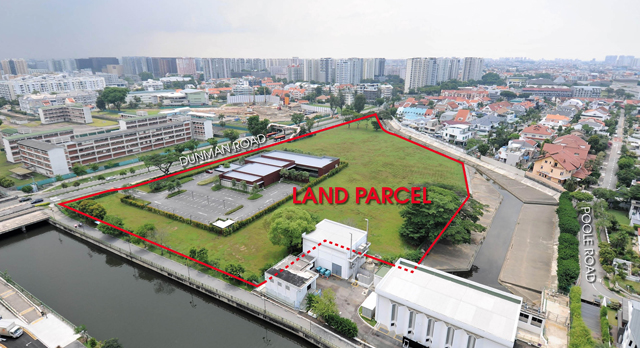 A RESIDENTIAL site at Dunman Road has been launched for sale, in a state tender that property watchers say could draw bids of over S$1 billion and up to S$1,400 per square foot per plot ratio (psf ppr).

The plot in the east comes under the confirmed list of the H1 2022 government land sales (GLS) programme. In announcing the tender on Monday (Mar 14), the Urban Redevelopment Authority (URA) also said it will remove a white site at Kampong Bugis from the H1 2022 reserve list with immediate effect, due to delays in the completion of soil remediation works. Development staging plans for this site will be placed under review by the government. (see amendment note)

Local property agencies say the site’s appeal lies its location near Dakota MRT station, high accessibility as well as its proximity to a number of schools and amenities. Given the project’s size and likely price quantum of over S$1 billion, they have pointed to the likelihood of developers forming joint ventures and consortiums to participate in the tender.

OrangeTee & Tie’s chief executive, Steven Tan, is expecting between 4 and 7 bidders for the site with the top bid ranging between S$1,250 and S$1,350 psf ppr.

He thinks the future development could fetch a potential selling price of S$2,300 to S$2,400 psf.

“The last mega project launch was Normanton Park. This site will test developer’s appetite for mega projects. If participation in Dunman Road GLS is good, it will give confidence to the mega developments seeking to go en bloc,” noted Huttons senior director of research, Lee Sze Teck.

PropNex is anticipating 3 to 5 bids for the project amid a “fair amount of interest” from developers, particularly those eager to bolster their land inventory.

The agency’s head of research and content, Wong Siew Ying, estimates the site tender could receive a top bid amounting to S$1.2 billion to S$1.3 billion to reflect a land rate of S$1,300 to S$1,400 psf ppr.

In Wong’s view, the large scale of this project is also likely to draw confidence among developers instead of deter them – considering how mega projects in the last few years have posted healthy sales with take-up rates of at least 90 per cent.

“With the dwindling supply of unsold new homes in the market and the relatively limited supply of new private homes in the vicinity, the site should still draw interest from developers,” said Wong.

While CBRE believes the Dunman Road site is among the most attractive on the GLS for its locational attributes, the commercial real estate services firm sees “heightened development risk” in the project considering its size, compounded by a 35 per cent ABSD on developers should they not sell everything within 5 years.

ERA Realty’s head of research and consultancy Nicholas Mak noted that there has been no other new residential projects launched in the Dakota housing estate over the last 12 years. As such, he sees pent-up demand for a new private condominium at the site’s location.

He believes the project could attract 6 to 10 bids from developers, with the top bid fetching between S$1,280 and S$1,380 psf ppr.

A comparable recent GLS site would be the 99-year leasehold condominium development land plot at Jalan Tembusu, said Mak. The plot can potentially yield 640 residential units and was sold to City Developments at S$1,302.26 psf ppr.

Future residents will also have direct access to the Geylang Park Connector, which runs along Geylang River and connects seamlessly to Marina Reservoir and Gardens by the Bay.

The tender for the 99-year leasehold site will close at 12 noon on Jun 2, 2022. Its closing will be batched with URA’s ongoing tender for a residential site at Pine Grove (Parcel A), which was launched for sale in February 2022.